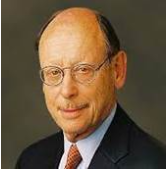 Bernard’s parents, Leah Lazarovich Osher and Samuel Osher (formerly Osherowitz), were Lithuanian and Russian immigrants who settled in Biddeford, Maine. “They believed that if you got a good education and worked hard, you could be successful—and if you were successful, you gave back,” says Barnard’s brother Harold.

The Osher family offspring have upheld this philosophy in more far-reaching ways than their parents could ever have imagined. Their parents Leah and Samuel Osher owned a hardware business and invested in real estate. Their hard work put their five children through college and graduate school.

Bernard Osher, a self-made billionaire and “the quiet philanthropist,” was born in 1927 and is married to Barbro Sachs-Osher. He started The Bernard Osher Foundation in 1977 which is headquartered in San Francisco. The Foundation seeks to improve the quality of life through support for higher education and the arts.

A graduate of Bowdoin College in 1948, Bernard Osher pursued a successful career in business, beginning with the management of his family’s hardware and plumbing supplies store in Maine and continuing with work at Oppenheimer & Company in New York before moving to California. There he became a founding director of World Savings, the second largest savings institution in the United States, which was sold to Wachovia Corporation in 2006.

Bernard Osher has been affiliated with a number of philanthropic and non-profit boards such as the Fine Arts Museums of San Francisco Foundation and the American Himalayan Foundation. He is the recipient of numerous honorary degrees and is a Fellow of the American Academy of Arts and Sciences. He also is a serious student of opera and an ardent fly fisherman.

“I know what a big difference higher education makes in a person’s life—enhancing career choices, earning power, and self-esteem—and I would like to help as many people as possible to have that chance,” Bernard says. A Bloomberg Businessweek article in 2007 listed him as the 11th most generous philanthropist as he had at the time given over $800 million to arts, education, and social services in his lifetime. As he has no heirs, he plans to give away his entire fortune to help members of several generations lead more fulfilling lives.

Bernard receives numerous letters from the recipients of college scholarships he has provided. "Reading letters from students we have assisted is the high point of each day," he says. "I'm always impressed by the fact that a relatively small sum of money can make such a profound difference in people's lives."

The Osher Reentry Scholarship at UNC Charlotte was endowed in 2012.

This scholarship was established in support of undergraduate students who have experienced a gap of five or more years in their education, pursuing their first baccalaureate degree and who anticipate workforce participation for a significant period of time after graduation.

This scholarship was made possible by the generous contribution of Bernard Osher Foundation.

To make a gift to the Osher Reentry Scholarship, please visit the OASES Make a Gift web page.